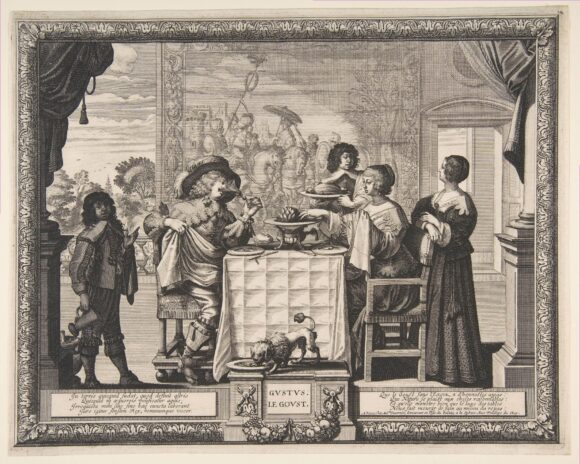 Beyond the Good Taste

Today, taste is regarded to be one of the concepts central to aesthetics. It is treated as a free and egalitarian means of assessing value regardless of political, economic, but also bodily necessities and interests. This liberated, mature understanding of taste, however, presupposes a specific configuration of sensuality and enjoyment, of practice and production, requiring a closer look.

In terms of culinary practices, how does the modern subject arrive at a mature, ›tasteful‹ mode of existence? How, why and in which contexts does taste and the act of tasting come to be one of the pivotal technologies of the self for a new cosmopolitan bourgeoisie going back to the 17th century? These questions are at the core of the research project »Beyond the Good Taste. Transformations of Culinary Sensuality«, which Stephan Zandt works on as part of the SFB 644 Transformations of Antiquity.

With the discovery of the New World, new exotic delicacies find their way to Europe. Coffee, tea or chocolate are not designed to fill one’s stomach. Their public, tasteful and appreciative consumption in salons and coffee houses constitutes a primarily social activity associated with a new tasteful cosmopolitan self-image. In their obvious references to mythic accounts of the development of culture dating back to antiquity and to the biblical genesis, taste plays a vital role in the various drafts of a history of humankind by Jean-Jacques Rousseau, Immanuel Kant or Georg Forster. In these accounts, taste also serves as a way to distinguish oneself from those newly discovered cultures and to draw a clear line between ›nature‹ and ›culture‹, between mouth and stomach. Where exactly are these lines drawn and charged, and how do they transform the antiquity they draw upon? Which modes of subjectification are connected to the act of tasting and the declaration of taste? What role does the eminent experience of otherness play, that is intrinsically tied to the enjoyment of exotic treats. Last but not least, what about the extra-european mouth and gullet, the taste and cuisine of those, who were frequently abused as a sort of ‘tasteless’ contrast to Europe’s ‘good taste’?

This project understands culture-historical aesthetics as a culture-historically informed question of what constitutes sensual insight and perception, as well as the aisthetic order, objects and practices, of power relations, forms of rule and violence within which they initially emerge.